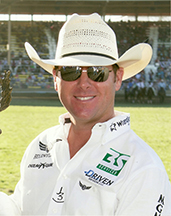 Trevor Brazile, of Decatur, Texas, has won 24 World Championships and nearly $7 million while competing in the PRCA. He won the All-Around title at the Pendleton Round-Up in 1999, 2012-15 and 2018. He won the tie-down roping in 1999 and the team roping in 2015. He has won numerous titles at other rodeos throughout the country on his way to 31 NFR qualifications. 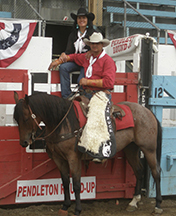 Marlo and Billy Ward’s association with the Pendleton Round-Up began in 1990 when they first provided horses for the Round-Up court at the Cheyenne Frontier Days. Billy’s service in Pendleton started in 2001 as a pick-up man, a position he held until he retired in 2014. Currently, he serves as chute boss. Marlo became a timer in 2004 and continues today. They have provided horses for Hall of Fame inductees for the arena presentations and for the Westward Ho! Parade. 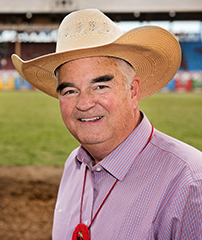 Steve Corey began his volunteer association with Happy Canyon over 65 years ago as a cast member. He was elected to the Happy Canyon Board of Directors in the late 1970s as Show Director before serving two years as President of the board. He currently does narration during the pageant. In addition, he has donated numerous hours of legal service to both Round-Up and Happy Canyon and has lobbied in the state legislature for issues related to Happy Canyon. Steve is also a past Round-Up director and president. He has been involved with the PBR since its inception, and serves as emcee during the sponsor dinner. Steve also continues to volunteer with the Round-Up’s awards presentations on championship Saturday. 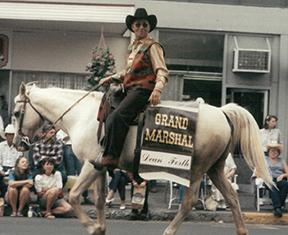 The late Dean Forth was a Round-Up volunteer for over 70 years. He was an integral part of the Westward Ho! Parade, securing teams of horses, buggies, and wagons for the annual event. Prior to the parade, he worked maintaining and repairing the rolling stock. Dean also pastured and cared for livestock owned by the Round-Up Association for 15-20 years. He served as one of the original Cavalry Riders with the parade. He won the Round-Up Appreciation Award in 1981 and was selected as Grand Marshal of the Westward Ho! Parade in 1991.

About the Hall of Fame:

The Pendleton Round-Up and Happy Canyon Hall of Fame was founded in 1969. Exhibits range from a full-sized Teepee to delicate beadwork, the exhibits in the Hall of Fame cover a wide range of subjects and span the over 100 years of Round-Up history. Saddles, clothing, Indian costumes, photographs, firearms, trophies, wagons…hundreds of items are displayed for your enjoyment. You can become a member of the Hall of Fame and help to ensure the history and artifacts of the Round-Up and Happy Canyon we enjoy today will still be here tomorrow. For more information call 541-278-0815. The Hall of Fame building is located at 1114 SW Court across from the Round-up grounds.